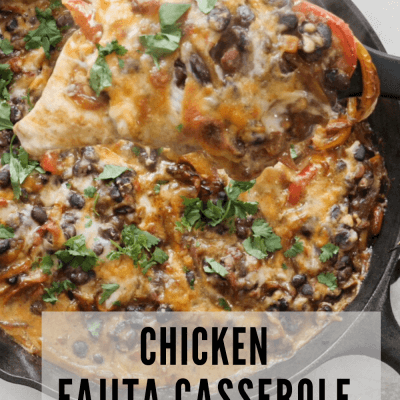 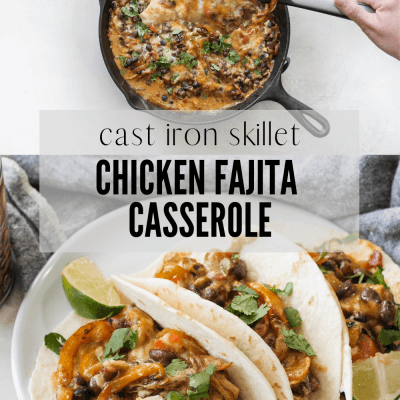 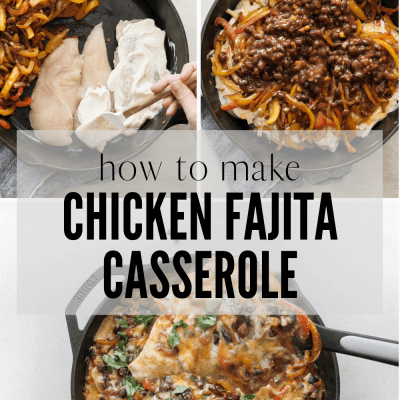 This is a sponsored post written by me on behalf of BUSH’S® Beans. All opinions are 100% mine.

Chicken Fajita Casserole is an easy weeknight recipe with all the fajita veggies, BUSH’S Black Bean Fiesta™, sour cream and cheese loaded on top of chicken breasts and baked in a cast iron skillet. So much yum. 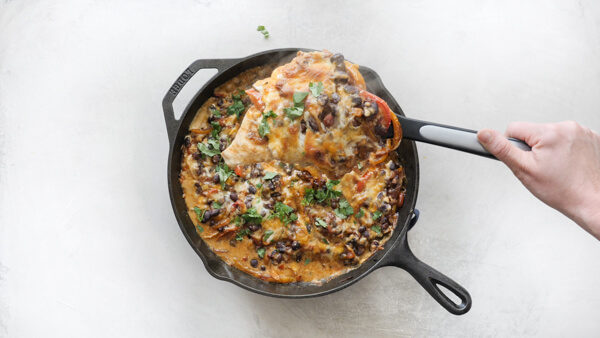 We could eat tacos, fajitas, nachos, burrito bowls and all the yummy tex mex things every single night… and sometimes we do. We love it and just can’t get tired of the flavors.

Chicken Fajita Casserole is a new recipe on the rotation because it’s so good it tastes like you’re eating out at a Mexican restaurant. It’s real comfort food. 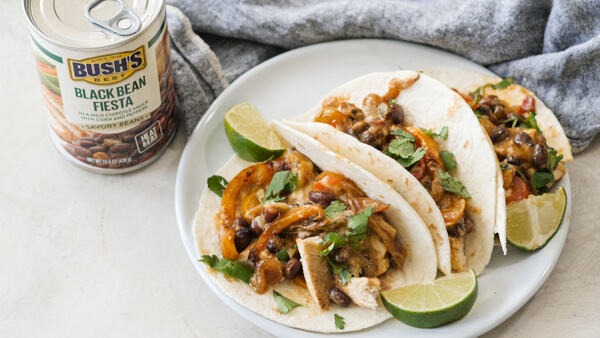 I love making family meals that the kids actually eat and Eric looks forward to when he comes home from work.

Reality check: it doesn’t happen every night at our house, but when I make the effort to get dinner on the table for a family meal, I’m always turning to those tried and true recipes like veggie packed spaghetti and anything tex mex.

In fact, I think my child might turn into a “dia” aka quesadilla or “chippie” as he calls tortilla chips. 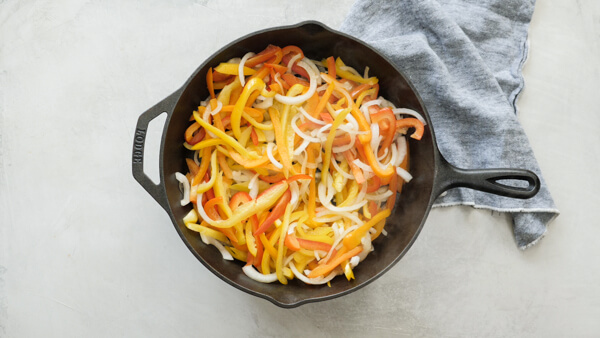 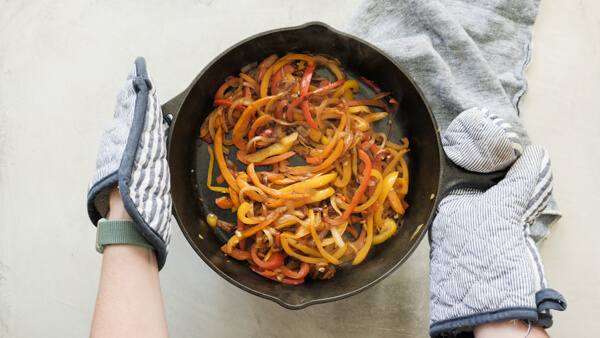 Chicken Fajita Casserole ingredients are always on hand at our house. Here’s what you’ll need to make this recipe: 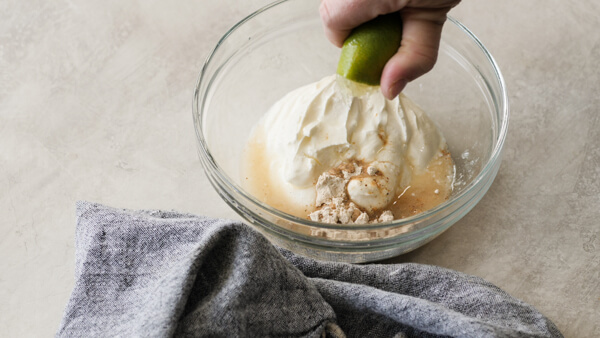 Do you need a cast iron skillet to make this recipe?

I love using my large cast iron skillet for this recipe because it conveniently goes from stovetop to oven with no extra dishes.

But if you don’t have an oven proof saute pan, simply saute up your fajita veggies first and then bake the rest in a casserole dish. It still cooks and tastes the same 🙂 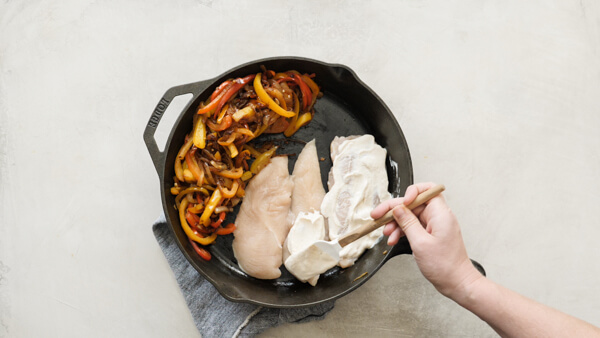 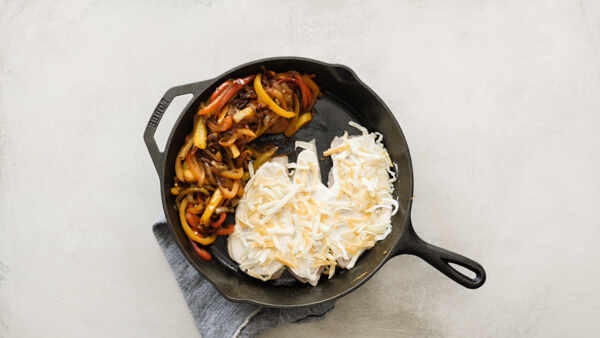 What are chicken cutlets?

They sell cutlets pre-packaged at most grocery stores, but you can cut them yourself and save some money, too. If you use regular chicken thick breasts this recipe might require double the cooking time! 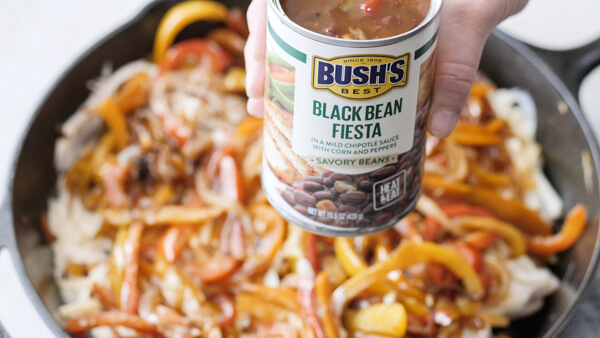 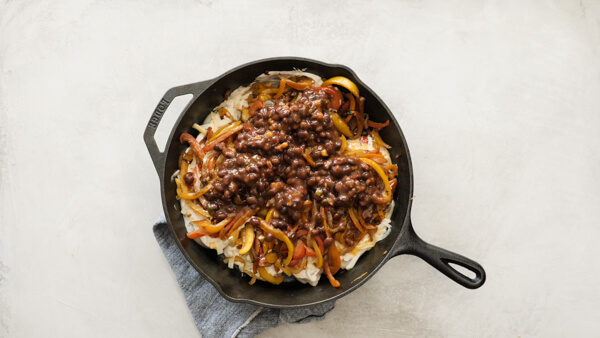 Chicken Fajita Casserole is an easy weeknight recipe with all the fajita veggies, black beans, sour cream and cheese loaded on top of chicken breasts and baked in a cast iron skillet. So much yum.

Thanks for stopping by Love & Zest. I’m Kristina LaRue, millennial mom of two active and hungry boys, which makes me an around the clock milkmaid and cheerio picker upper. Here on L&Z, I share (mostly) healthy recipes to fuel the whole family and real life stories of modern motherhood.
ABOUT KRISTINA

JOIN 10,000 OTHERS AND GET ACCESS TO MY FREE LIBRARY OF RESOURCES: Our latest Weeknight Dinner Guide to make getting dinner on the table easier is now available!